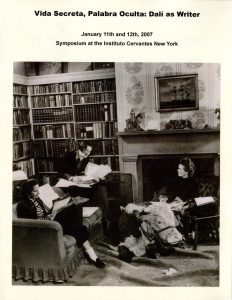 The Salvador Dalí Museum, together with the Fundació Gala-Salvador Dalí, and the Cervantes Institute, convened leading scholars in New York in January, 2007 to share ideas and to advance perspectives on the writing of Salvador Dalí. A symposium focused on Dalí’s literary creations as literature—that is, writing as writing and not more narrowly as linguistic entry into the biography or the plastic work—had not been held previously. Participants were encouraged to explore individual writings of Dalí or the body as a whole, and to consider formal and stylistic elements, literary antecedents, the historical cultural context, and the place of the writing in Dalí’s oeuvre.

Introduction to Dalí as Writer by Hank Hine

Dawn Adès
Dawn Adès is a Fellow of the British Academy, a former trustee of Tate, Professor of the History of Art at the Royal Academy and was awarded a CBE in 2013 for her services to art history. She has been responsible for some of the most important exhibitions in London and overseas over the past thirty years, including “Dada and Surrealism Reviewed,” “Art in Latin America” and “Francis Bacon.” Most recently she organised the highly successful exhibition to celebrate the centenary of Salvador Dalí at the Palazzo Grassi in Venice (2004) “The Colour of my Dreams: The Surrealist Revolution in Art”, at the Vancouver Art Gallery (2011), and was Associate Curator for “Manifesta 9” (2012). She has published standard works on photomontage, Dada, Surrealism, women artists and Mexican muralists. Dawn is now partially retired but continues to supervise PhD students.
The Tragic Myth of Millet’s ‘Angelus’

Enric Bou
Enric Bou is a critic and literary historian of Catalan literature.  He was a professor of Hispanic Studies at Brown University from from 1996 to 2011. He currently is a professor of Catalan and Spanish Literature at Università Ca’Foscari in Venice, Italy. He is a member of the Modern Language Association, the Associació Internacional de Llengua i Literatura Catalanes, and of AISC (Associazione Italiana Studi catalani) and of the North American Catalan Society. His recent book publications are Daliccionario. Objetos, mitos y simbolos de Salvador Dalí, published by Tusquets in late 2004, and Invention of Space. City, Travel and Literature, published in 2013 by Iberoamericana / Vervuert.
Dalí as writer: construction of memory

Fèlix Fanés
Felix Fanés is a Professor of the History of Art at the Universitat Autonoma of Barcelona. He has published on the topics of art, literature and cinema. From 1992 – 2000 he was director of the Centre d’Estudis Dalinians (Fundacio Gala-Salvador Dalí, Figueras) and was a “Visiting Scholar” in the Institute of Fine Arts (New York University). He contributed to the Complete Works of Salvador Dalí (2005) (Vol 1 textos autobiograficos 1 – edición y prólogo).  He wrote Salvador Dalí: The Construction of the Image, 1925-1930, published in 2007 by the Yale University Press. In addition, he organized “Dali. Cultura de masas” (CaixaForum, Barcelona, and MNCA Reina Sofia, Madrid, 2004) and collaborated in the preparation for the Tate Modern of London exhibition “Dalí & Film” (June 2007).
THE SECRET LIFE OF SALVADOR DALÍ AS LITERARY TEXT

Hank Hine
Dr. Hank Hine joined The Dalí Museum as Executive Director in 2002. The Museum has grown to attract as many as 400,000 visitors annually and is an international cultural destination. Dr. Hine was instrumental in implementing the creation of the new building which opened on January 11, 2011 and has been named “one of the top ten buildings to see in your lifetime” by AOL. Dr. Hine earned his undergraduate degree at Stanford University and his Master’s and Doctorate degrees at Brown University. He has extensive experience with contemporary artists and writers and the intersection of media in the current cultural milieu. Dr. Hine was founder and director of Limestone Press and Hine Editions, a San Francisco publishing house specializing in artist books and the production of museum catalogs. He served for seven years as Director of the research and publishing institute GraphicStudio at the University of South Florida in Tampa before joining The Dalí. A writer and educator, Dr. Hine’s publications include text and image relationships, contemporary art, and the opportunities of new media.

William Jeffett
William Jeffett is Chief Curator, Exhibitions at the Dalí Museum. He is a specialist in Surrealism and Spanish art and has published extensively on these subjects. Recently he curated Miró and the Object for the Fundació Joan Miró, Barcelona and CaixaForum, Madrid. He is currently preparing Dalí and Duchamp as co-curator with Dawn Adès for the Royal Academy, London and the Dalí Museum.
Dalí and the Spanish Baroque: From Still Life to Velázquez

Juan José Lahuerta
Juan José Lahuerta is the Director of the Gaudí Chair at the Barcelona School of Architecture, and the Chief Curator of the National Museum of Art of Catalonia in Barcelona. He has been a member of the Collegio Docenti, Istituto Universitario di Architettura, in Venice, holder of the King Juan Carlos Chair of Spanish Culture and Civilization at New York University, and “senior” curator of the Picasso Museum in Barcelona.
He has published books on art and architecture, like for example Antoni Gaudí. Architecture, Ideology and Politics (1993); Le Corbusier. Espagne. Carnets (2001); Religious Painting. Picasso and Max Von Moos (2015); Photography or Life: Popular Mies (2015); On Loos, Ornament and Crime (2015); Antoni Gaudí. Ornament, Fire, and Ashes (2016). He has also edited anthologies of texts on Gaudí, Giorgio de Chirico, Le Corbusier, Salvador Dalí… and curated exhibitions on Dalí, Gaudí, or Picasso, among others.
He is a member of the scientific committee of the Milan-based review Casabella, and founder and director of Mudito & Co. (Barcelona), which received a FAD (Promotion of Arts and Design) medal for its publishing work in 2007.
“Rêverie” (notes, fragments, and collage for a lecture)

Christopher Maurer
Christopher Maurer, who is Professor of Spanish at Boston University, has edited, translated and written about Federico Garcia Lorca and other Spanish poets from the 16th to the 20th centuries. Prof. Maurer is the editor of Garcia Lorca’s Collected Poems and Selected Verse; his lectures (Conferencias); his early prose (Prosa inedita de juventud), and editor, with Andrew A. Anderson, of Garcia Lorca’s complete letters (Epistolario completo). His translated books include Lorca’s Deep Song and Other Prose, In Search of Duende, and A Season in Granada, a collection of letters between Lorca and Salvador Dalí (Sebastian’s Arrows published by Swan Isle Press),  The Art of Worldly Wisdom by Baltasar Gracian, and works by Juan Ramon Jimenez (The Complete Perfectionist: A Poetics of Work) (Spanish translation fall 2016, Madrid, Fundamentos). His most recent book, co-authored with Andrew A. Anderson, is Federico Garcia Lorca en Nueva York y La Habana: Cartas y Recuerdos (Galaxia Gutenberg, 2013).
GARCIA LORCA, DALÍ, AND THE METAPHOR, 1926-1929

Michael R. Taylor
Michael R. Taylor is the Chief Curator and Deputy Director at the Virginia Museum of Fine Arts in Richmond, Virginia. Prior to his appointment at VMFA in May 2015, Dr. Taylor served as the Muriel and Philip Berman Curator of Modern Art at the Philadelphia Museum of Art from 1997 to 2011, and Director of the Hood Museum of Art at Dartmouth College from 2011 to 2015. A highly regarded curator and author, he is an eminent scholar of Dada and Surrealism with a focus on the art and ideas of Salvador Dalí and Marcel Duchamp. In 2004, he co-curated (with Dawn Ades) the international exhibition, Salvador Dalí: The Centennial Retrospective, and in 2009 his exhibition catalogue, Marcel Duchamp: Etant donnes, won both the prestigious George Wittenborn Prize and first prize for best museum permanent collection catalogue by the American Association of Art Museum Curators.
God and the Atom: Salvador Dalí’s Mystical Manifesto and the Contested Origins of Nuclear Painting