Dalí Revealed includes 48 archival photographs taken by French photographer Robert Descharnes, a close friend and confidant of the Dali’s. Descharnes was introduced to Salvador Dalí by the painter Georges Mathieu on board the S. S. America in 1950, while en route to the United States; the two remained friends until the artist’s death in 1989.

This exhibit reveals moments of Dali’s daily life, his wife Gala, their friends, and collectors. Highlights include candid moments at Dali’s home and in his studio, boating, and even at a bull fight. One particularly notable image captures the artist at work on his monumental painting “Gala Contemplating the Mediterranean Sea” in his New York residence. These photographs have not been on display for more than ten years and provide a rare glimpse into the extraordinary life of this extraordinary man.

Robert Descharnes (1926–2014) was a photographer,  writer and film director. Over the course of their friendship, Mr. Descharnes accumulated over 60,000 negatives and authored several books about Salvador Dalí. He and Dalí collaborated on cinematic projects over the years, most notably the unfinished film titled “L’Aventure prodigieuse de la Dentellière et du rhinocéros” (The Prodigious Story of the Lacemaker and the Rhinoceros).

Dalí Revealed is curated by Dirk Armstrong, assistant curator of The Dalí.

In preparation of this exhibit, we invited Museum visitors for a behind-scenes-look of the planning, framing and hanging during a four-day gallery install. The exhibit opened on May 28, 2015 with a Dalí Museum member assisting with the preparation of the final photograph. 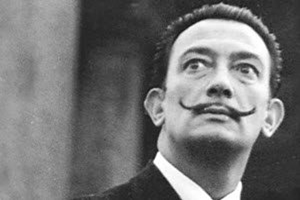