Francisco José de Goya y Lucientes (1746-1828) is one of the most important Spanish artists of the late eighteenth and early nineteenth centuries, celebrated for his revolutionary paintings, drawings and engravings. Goya’s life and works deeply influenced Salvador Dalí in his early years, and are considered by many scholars to be the basis for “modern” art, bridging Classicism and Romanticism. Before Dalí: Goya — La Tauromaquia, sponsored by Tampa International Airport,  features two alternating suites of first-edition prints, published in Goya’s lifetime, alongside three significant paintings representing unique themes of Goya’s works. The works are on loan from the Meadows Museum, Dallas, TX, home of one of the most substantial collections of Goya.

La Tauromaquia (1816) is a suite of prints depicting the evolution and history of bullfighting on the Iberian Peninsula. Goya created La Tauromaquia between 1815 and 1816, at the age of 69. Los Caprichos, a series he had created previously, served as visual criticism on subjects concerning war, superstition, and contemporary Spanish society generally, including anticlerical scenes. Because of their sensitive subjects, few people had seen these works during Goya’s lifetime. Bullfighting was not politically sensitive, and the series was published in an edition of 320—for sale individually or in sets—without incident. It did not meet with critical or commercial success. The artist focuses on the violent scenes that take place in the bullring and the daring movements of the bullfighters. The events are not presented as they are viewed by a viewer in the stands, but in a more direct way. Learn about Los Caprichos. 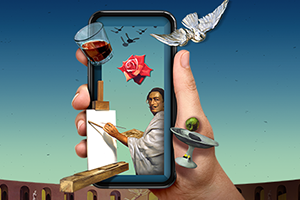